Co - production with the Joseph Beuys Theatre, Meyerhold Center ,the National Center of Contemporary Art (NCCA) and the Institut of Culturepolitics

A play by Lyubov Mulmenko

Next performance:  4th and 5th of April 2015 at the Russian Case program of the Golden Mask Festival in Moscow.

"The action of the Mulmenko/Genoux production is set in an actors’ retirement home (this type of seniors complex was invented by great Russian actress Maria Savina early last century). This documentary staging is focused on an old man who imagines himself King Lear and tries to model his life upon the story of Shakespeare’s tragedy. The old man Viktor has children whom he had anathematized a long time ago. He had divided his legacy unfairly and he possesses an i-pad with monologues from “Lear”. Although he has several flats he has chosen to live in the retirement home, one of the reasons being that there is an alarm button under his bed and he can press it any moment he feels he is in danger. The intricate interlacing of not an ordinary man’s life and the Shakespearean myth are woven into the texture of the play. Things invented get mixed up with real happenings and the reality is rectified by the mythology. The real objects holding the memories of the body, videos from the retired actors home, the man character’s monologues being half rational and half crazy eventually plunge the viewers into another person’s private life integrated with one of the world theatre’s greatest stories."

"Georg Genoux's play is wonderfully touching and clever. The unusual and complex staging of his work is an example of the kind of pure form I have almost never seen in the theatre before. Come, take a look - you'll find an absolutely unique hero, one truly worth seeing".

“I can’t think of another production in the genre of verbatim that would penetrate so deep into the soul of a specific person. In the context of modern theatre this production looks exceptionally disturbing and somewhere half way between the beginning and the end the content starts to prevail over the form and with all the rejection of the character one can’t help feeling deeply for him. After I left I was crying for about 40 minutes – such was mu excitement about the performance and about the fact that it was the last performance of Beuys Theatre. The courage with which this elderly man having long developed his very personal notion of the beautiful firstly dared open himself so widely to the audience and secondly to allow the young director and playwright turn his work into a piece that seemed far from his own visions and beliefs”

"The dominating motif of “King Lear” is not so much the loss of connections between the history, the man and his milieu. This problem is the motif of social illusions and expectations, as well as of the moral ideals that all too often cannot be translated into reality. In “Lear is Rehearsing His Death” the scenic action incorporates documentary texts, namely the words of the actors having long left the stage and being on the way out at the Retired Actors Home. Their testimonies reveal the nostalgia for the unrealized ideas but they also constitute actualization of their memories. The staging employs interactive technologies that make for each member of the audience not only to witness the happenings on stage but also to directly take part in the performance."

“Lear is Rehearsing His Death” is Viktor Rotin’s very explicit, maybe too explicit, self-revelation. How does it feel to stand on stage and confess that you love nobody, that your son wishes you die and your daughter is ferreting in your pockets for money? Being fully aware that it would be too hard for an actor to play an autobiographic mono performance (which would seem to be only logical), Georg Genoux uses installation with Rotin being one of the exhibits thereof. The action unfolds in the very compact space of the black room of Meyerhold Center. There is no stage or the traditional seats. The acting space is shaped by the four walls hung with photographs, pictures, merit certificates and other personal items of the actor. The absence of seats underscores that the audience is an alien element in the life-story of this man. All through the show the audience hears Rodin’s powerful recorded voice and his I-pad videos illustrate his life in the Retired Actors Home."

"This is a very intimate verbatim staging, a documentary show, a radio play… It is hard to define its style or genre. Instead of the sets there is the installation of the things that belong to the protagonist. There is no acting on stage; only the videos illustrating the life of the real man. Instead of an actor reading the text there is the voice-over recounting the man’s life story. “Lear is Rehearsing His Death” is a study of the life of the particular person – Viktor Y. Rotin who lives in the Retired Actors Home and who is convinced of his kinship with King Lear. Indeed, there are quite a few parallels: the conflict with the children, share-out of property, possession of some estate, the trial by poverty in the past. Now Rotin has two purposes in life: to take revenge on the posterity and to stage a perfect “King Lear”."

I once participated in a public discussion about perceptions of theater in the U.S. I spoke my piece and one of the actors of the host theater raised his hand and said, almost, but not quite, aggressively, "Yeah, but what about love?"

I was grateful that Carlos Uriona, a leading actor of Double Edge Theater in Massachusetts, brought that up. He gave me both the kick in the pants, and the right, to talk about love and theater in one breath. I have used Carlos's question to kickstart numerous conversations since and I use it again in the following consideration of Georg Genoux's production of "Lear Rehearses Death," a joint production of Joseph Beuys Theater and the Meyerhold Center.

"Lear Rehearses Death" is infused from top to bottom with love — the love of a director for his work and the people who help him make it, the love of literature, life and myths, the love that we harbor for a fellow human being who has the nerve, the courage and the hubris to love himself even when, as the actor playing the actor who is rehearsing a future production of Shakespeare's "King Lear" boldly admits, he never loved a soul in his life.

That man, the actor playing this role, is lying, of course. He loved his mother. He may no longer love his son and his former wife, whom he bitterly rejects, but now, at the age of 80-something, he is willing to forgive his daughter even if he claims he no longer loves her.

But doesn't this production prove that forgiveness is, in some way, a manifestation of love?

Perhaps forgiveness is an exalted form of love. And, if it is, failure to achieve it is the failure to achieve a love of great proportions. What is important to recognize here is that failure is just one step, one measly step, away from greatness.

"Lear Rehearses Death," which makes thoughts like this inevitable, is a kind of performance installation. It combines film, documentary drama, museum exhibits and live performance. It boldly erases the lines that separate an actor, Viktor Rotin, from the character he plays, an actor rehearsing the role of King Lear.

Over the period of a year, Genoux and playwright Lyubov Mulmenko met with Rotin, interviewed him, filmed him and asked him to film himself and his home surroundings as he talked about his past, his work and his present. Rotin rehearses bits and pieces of "King Lear" as he tells how he spent three years in prison for "speculation" during the Soviet years, how he believes that his wife stole money his mother left for him, how he rejected his children and has now come to live for doing charity work.

Some of this information we watch in film clips, some we hear as audio recordings while we peruse museum-like exhibits hanging on the walls — photos and other objects from Rotin's personal and professional past. Halfway through the performance Rotin himself appears and sits silently among the spectators in various places around the room.

Let's be careful about attaching to Rotin too much of what emerges during the performance. Genoux gives him a few moments at the end of the show to step out of character and have his own say. One of his first comments at the show I attended was, "Genoux took a lot of liberties with my personal history."

Let's accept that statement at face value, even as we accept at face value the love that this strange, fragmentary performance encourages us to embrace.

The actor played by Rotin, and drawn by Rotin, Genoux and Mulmenko out of his own biography, emerges as a profoundly strong, flawed, wise, foolish, tragic, intangible and lovable character.

Genoux, a native of Germany, offers this production as the last staged by his Moscow-based Joseph Beuys Theater before he moves to Bulgaria where he now runs a new, experimental theater. "Lear Rehearses Death" is a beautiful, moving show, arguably the best thing Genoux has done in 15 years in Russia. It is a true labor of love. 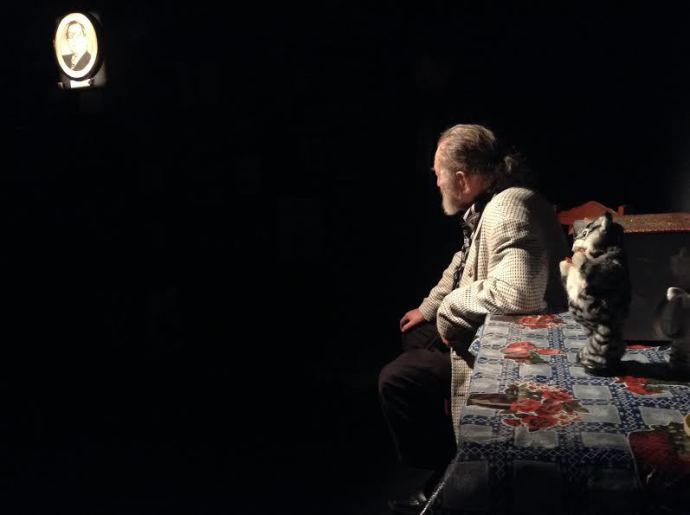